Freda Desai worked at Crown Lynn in the decorating department from 1958 until 1964. She is photographed here, at the age of about 15, in front of Prime Minister Walter Nash, and Crown Lynn managing director Tom Clark. 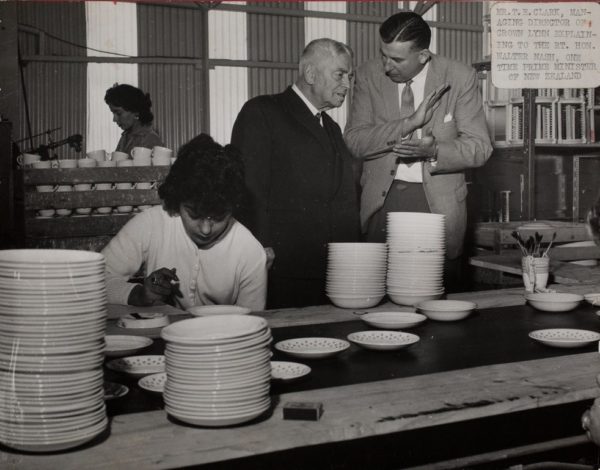 Speaking to Freda she said she didn’t know that Nash was visiting, nor that her photo was going to be taken ‘I heard Tom’s voice and just kept my head down and continued working’ she said. I asked her about her outfit, if she dressed up for the day ‘no this is just what I wore, on a normal day.’

In this image Freda is banding plates using a soft camel hair brush, on a rotating banding wheel. ‘We all sat along the conveyer belt’ she said ‘We took plates out of a big crate beside us and once we had decorated them they would go down the conveyor belt.’ Looking at the box of matches in the foreground Freda laughed ‘Lucky that stack of plates is in the way of my ash tray; we all smoked all the time.’ Freda paused ‘Maude Bowles didn’t smoke . . . she was a damn good boss.’ Maude Bowles was the head of the decorating department, and taught Freda how to paint. ‘Maude sat down and showed me what to do, and I just copied her movements.’ When it was slow Freda would sometimes apply transfers, or go down and help with packing, but mainly she was banding and hand decorating. Freda remembers decorating with gold. Maude would tell her not to spill the bottle and remind everyone how much each bottle of gold was worth! Freda put a little ‘Y’ on the base of her pieces for quality control.

I asked Freda about the factory and if she ate lunch at the Café ‘Oh yes, I ate at the café we all did’ she said ‘I ate donuts and a coke [laughs] I think I even had that for breakfast … I was only young!’ Freda remembers how social Crown Lynn was, she went to lots of parties and went to socials at the Trade Hall on Thursday, Friday and Saturday nights. Freda left Crown Lynn in 1964 when she moved to Christchurch.

Freda Crawford (nee Desai) at Te Toi Uku in September 2017, holding an image of herself working at Crown Lynn in 1958

We were looking through other photos and Freda said “Oh that’s Maude Bowles. The one in the middle, Maude always wore a pink smock.”
Maude Bowles was the head of the decorating department for many years. 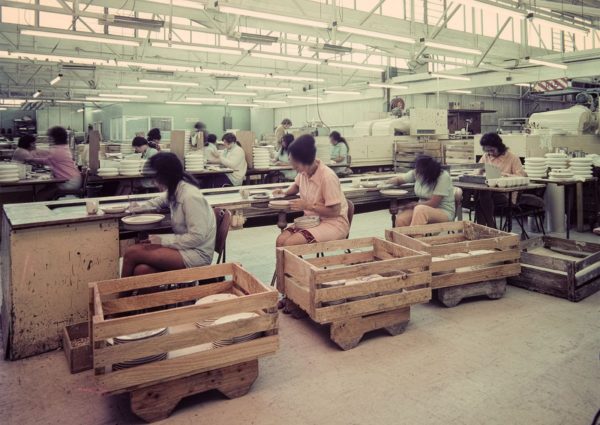