When we were cataloguing the collection of Richard Quinn, we came to some ginger jars. We had not seen anything like them before and we had to catalogue them. Were they made by Crown Lynn or not? The backstamp made us think they were made in China. A quick trip next door to the English Language school I learned that “Kienhua China” and the symbol on the base both meant “Made in China” so that didn’t help.

We knew that Tom Clark, the managing director of Crown Lynn Potteries, had made ginger jars as he had mentioned it in an interview with Gail Henry and we knew he put random things like “British” on his products, so anything was possible. There were a few in the collection. The colours mostly seemed to match other items known to be made by Crown Lynn and the clay seemed similar too. We trusted that Richard Quinn knew what he was doing when he found these ginger jars when trawling op shops.

Eventually when we were nearing the end of the project we started to catalogue the shards that Richard Quinn had dug from behind the factory. These included some shards from ginger jars. This seemed to be the proof we needed that the ginger jars were made by Crown Lynn. This shard in particular shows that there was a glaze defect and why it was thrown away. 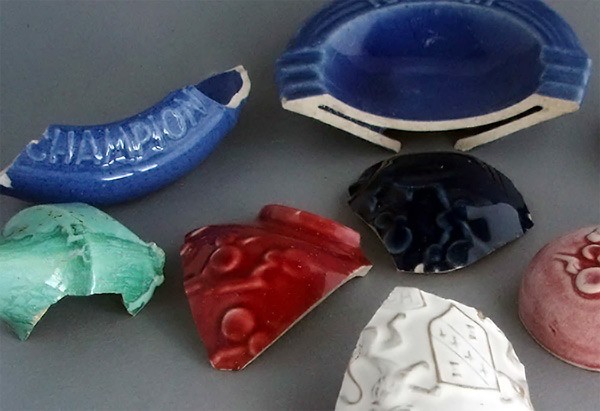 In the last year or two there has been a lot of discussion between collectors about the source of the ginger jars and some examples with “Crown Lynn” on the base have come to light. This seemed to be pretty conclusive, but some people then suggested that Crown Lynn bought them from China and stamped them with their own backstamp. Some other people suggested that ‘fakes’ were made in recent times. Another possibility is that Crown Lynn copied the Chinese versions, but there is no evidence that there is any difference between those with the two backstamps.

Further information about the ginger jars was given to Te Toi Uku in September 2020 when I (now Curator of the Museum) was given information by Colin Miller. Colin worked at Crown Lynn from 1954 until 1958 and donated us a vase he glazed in the same glaze as the ginger jars. So I asked him if he knew about Crown Lynn making the ginger jars and he said yes they definitely made them and the Chinese backstamp was used at the Crown Lynn factory as well as the Crown Lynn backstamp. He wasn’t sure if different batches were given different backstamps and if they were exported to China or if they were sold in a Chinese shop in Auckland with ginger in.