We had a visit from Joan Josling, who was visiting Te Toi Uku Museum with the U3A Birkenhead group. She asked if we had the winning entry from the 1959 Crown Lynn Design Awards, as she couldn’t see it on display – she could see the second place design ‘Narvik’ designed by Don Mills.

It turns out that her husband Otway Josling had designed the winning entry – ‘Reflections’ a pattern with stylised fern leaves. And as she spoke to me, Joan pulled a plate (complete with bracket) from her bag to show me, along with a bunch of newspaper clippings from 1959. “This is usually on the wall” she said, “I remember flying up to Auckland to the awards and meeting Tom Clark. Otway and I were about to get married, so we bought a lounge suite with the prize money.”

The Crown Lynn Design Awards started in 1959 and ran annually for over twenty years. The competition was open to everyone who wanted to enter. Crown Lynn provided the template, and all the designer had to do was fill it in.

The 1959 awards received around 100 entries – the winner was Wellington-based designer Otaway Josling, who submitted an entry of four stylised fern-leaves in black and white on an all over blue background. This was first produced for the domestic market with a teal background, then in 1964 on vitreous china for the national airline TEAL. 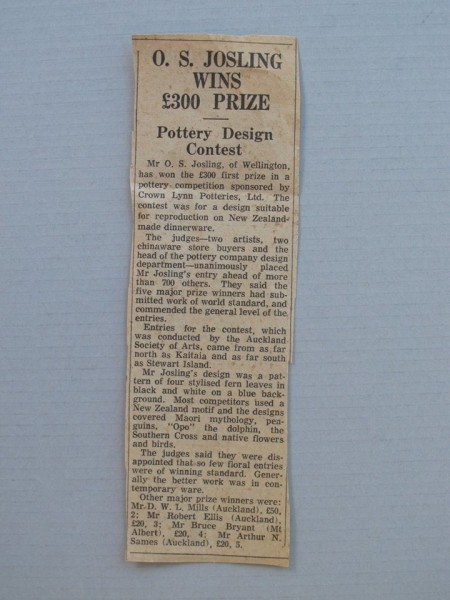 According to Crown Lynn: Crockery of Distinction the Pattern was also used extensively by hotels which had a mushroom coloured background.