Among the Te Toi Uku archives is a School Journal with an article on Maude Bowles, who was head of the decorating department at Crown Lynn for about thirty two years until the Crown Lynn factory closed in 1989. Maude Bowles wore a distinctive pink smock. Everyone that worked with Maude Bowles and has come in to Te Toi Uku says what a wonderful boss she was. If you have a story about Maude, or working at Crown Lynn – we would love to hear from you. 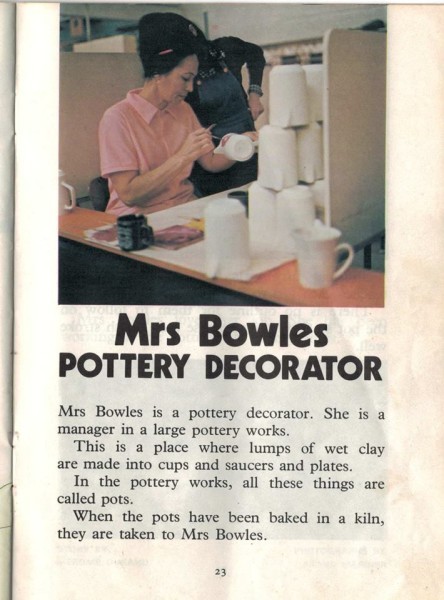 Mrs Bowles is a pottery decorator. She is a manager in a large pottery works. This is a place where lumps of wet clay are made into cups and saucers and plates. In the pottery works, all these things are called pots. When the pots have been baked in a kiln they are taken to Mrs Bowles. 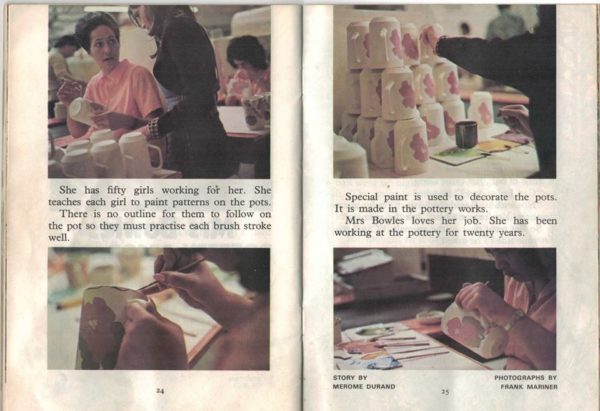 She has fifty girls working for her. She teaches each girl to paint patterns on the pots. There is no outline for them to follow on the pot so they must practice each brushstroke well.

Special paint is used to decorate the pots. It is made in the pottery works. Mrs Bowles ves her job. She has been working at the pottery for twenty years.

(The pattern she is painting in this story is called Fleurette).