In November 2016 Moeroa Brothers came to visit. Moeroa worked at Crown Lynn for 30 years from 1969-1989 in the transfers department, managing 30 workers.

Moeroa joked that since she was from Rarotonga, management assumed that she could speak all Pacific languages – so often Moeroa would train new workers from Samoa and Tonga. “I speak Cook Islands Maori, not Samoan or Tongan” she said “To make them understand, I would act out the movements …” like charades. Most workers from the Islands would work on a 6 month visa, then return home. So Moeroa would always be training new workers.

Te Toi Uku had a cup with Moeroa’s name on it in the collection – the cup was made to give to staff in 1989 when the factory closed, but the cups were defective so they were never presented (and thrown into the tip instead). 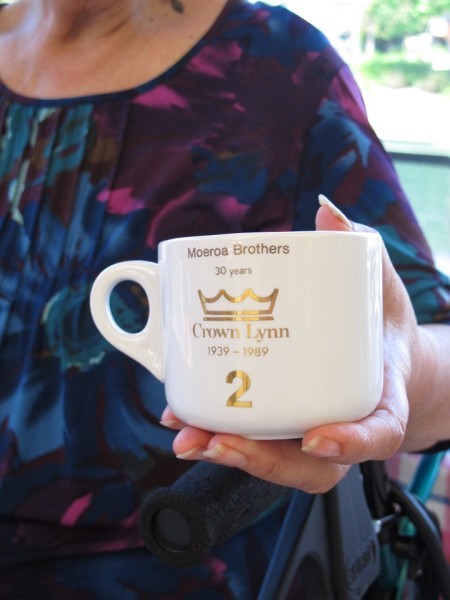 Cups like this were presented to all Crown Lynn staff in 1989. The large number is the number of the sequence of being called up to get your leaving gift – Moeroa was 2nd

Moeroa asked if we had any of the crockery from Tom Clark’s yacht ‘Buccaneer’? We did – I handed her a cup. “Tom came to me and said ‘I want you to do the decoration.’ she said ‘I was proud to have been asked’. Moeroa was known for her precise & high quality work.

It was lovely to meet Moeroa and hear some of her stories. She even met the Queen!

If you worked with Moeroa, or at Crown Lynn please get in touch, it would be great to hear your stories too. 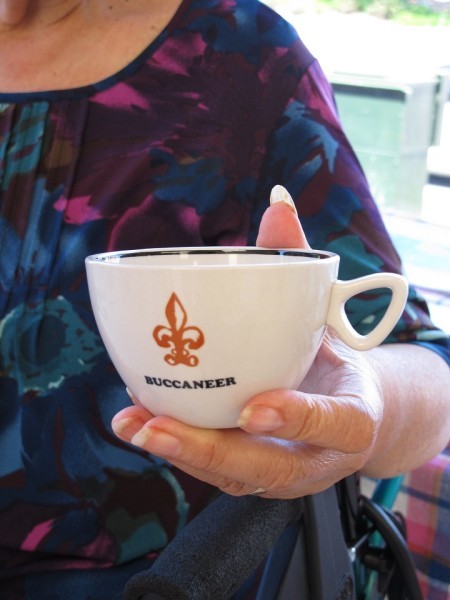 This cup was made by Moeroa for Tom Clark’s boat ‘Buccaneer’.