We had a visit from a man named Andrew. He came into the museum holding a plastic bag with things clinking against each other inside. He pulled out what looked like a railway cup without a handle. I had seen these before, but didn’t know what they were.

Andrew said ‘these are cut-out cups’ that were used to cover the fuses on the powerlines outside your house. For nearly 30 years Andrew worked as a linesman for the Power Board, he said that every work caravan across the country would have cupboards of these cut-out cups that were used for drinking tea, coffee and the occasional beer. 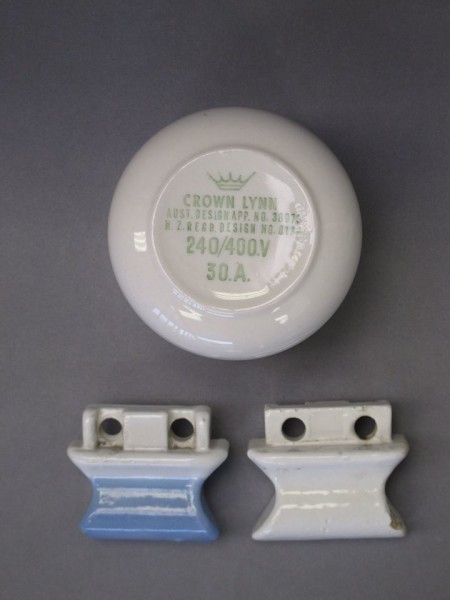 Outside your house the cup would sit above the fuses, known as ‘cut-outs’ in the industry. The white fuse holder was to the mains of the house and the blue fuse holder was for the hot water.
More recently these ceramic caps are being replaced with plastic Michaud fuses.

Andrew has collected some of the old cups destined for the landfill to use at home. “I use these cups to serve single portions of mac and cheese to the kids” Andrew said.

One cup is stamped with the ratings, both have ‘NEW ZEALAND’ impressed into the base.

The Crown Lynn Railway cup is based on this design.