Marion Potbury, donated this lovely child’s tea set to Te Toi Uku, to accompany the set she wrote this story: 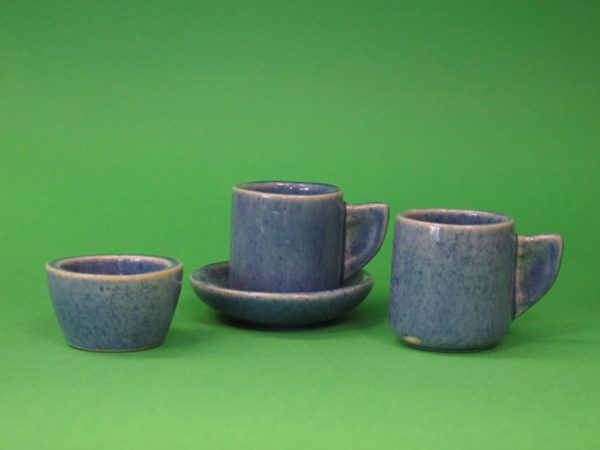 “This Teaset was a gift from Santa around 1946, it was the first actual Santa gift of significance I received I was 10 years old. The depression years in late 1930’s followed by WW2, also being 5th child of a family of 7, all contributed to lean Christmas’s where families made do with sweets and modest gifts, hence the Teaset was the biggest surprise ever, I was in wonder at this beautiful gift.

My father who worked shift work in the kiln at Crown Lynn told me that he managed to purchase this set at the staff 2nds shop. It was a sample set which was made and it was decided not to carry on with production, but I think it was an experiment with the “blue” glaze. So far as I am aware it was a one off.

I vividly remember walking from our home in Taylor St, down Wolverton Rd, across the concrete bridge over the Whau river along Clark St., to the New Lynn end, where my Dad was working in the very dark, very hot kiln, he was working the late shift and I would deliver to him his sandwiches and a thermos of tea for his evening meal.

I used to set up a wooden apple box obtained from the local orchard and cover it with a teatowel and play teaparties with my little brother using water or sometimes if lucky, orange cordial. My Dad sometimes had a cuppa with me after mowing our huge lawn, with his hand mower. 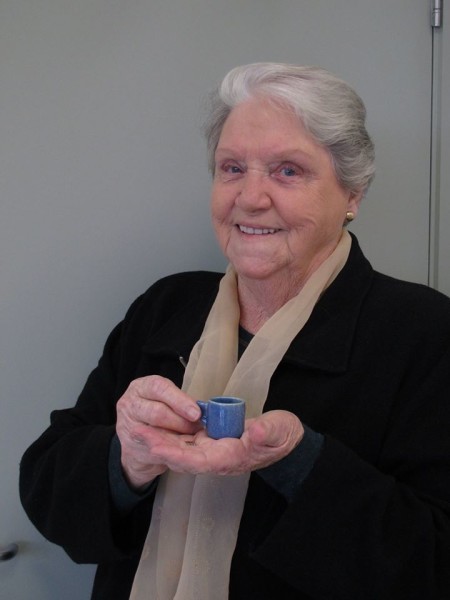 The set consisted of 4 cups, saucers and plates, a teapot, milk jug and sugar bowl. It was handed down to my sister and these pieces were rescued by my mother who gave them to me many years later when I bought a China cabinet.