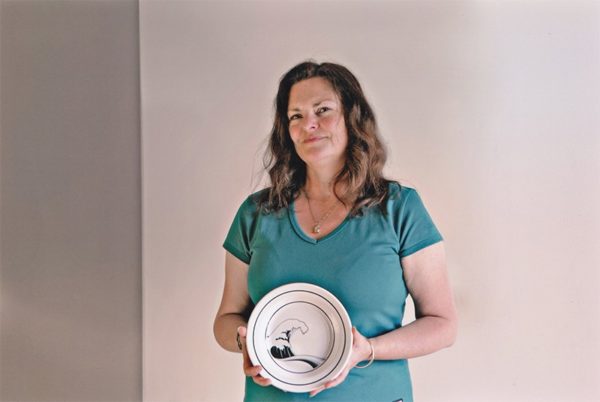 Juliet joined Crown Lynn Potteries as an Assistant Designer after graduating from a Graphic Design Diploma at Auckland Technical Institute in 1979. At the end of the year companies would come to the Polytech to check out the graduate’s work. Juliet was offered a position in the design studio at Crown Lynn. Juliet was a prolific designer and her most popular design, Last Wave, was one of the best selling patterns of the time. So much so, they increased the product range to include cookware the following year.

The chief designers at that time were Dave Jenkin and Mark Cleverley. Dave Jenkin was the head of the design studio. The other assistant designers were Jan Scoones and Ian McNee. A year later, Tom Arnold was employed as Head of Design when Dave Jenkin retired.

She recalls the design process “We drew ideas and then made mock ups on the cups and plates. Either wrap around or motif designs, painted in gouache on paper. When they were accepted by the Sales Team we did colour separations by hand, often up to 6 colours on permatrace with black ink. So one separation for each colour with a registration mark in 3 corners to line it up. This was then transferred to film work by Rennies Illustrations in Parnell. The film was used in the final stage for getting the design onto a silk screen or etched metal plate depending on the process they were going to use.”

One of her favourite memories were the large metal barrels at the factory which were filled every day with broken china, bad glazing, dud colours or seconds that were beyond help. “If we were having a bad day we could go down to the factory where these bins were, don some goggles and smash the china to our heart’s content with an iron bar. It was very satisfying.”

Juliet was made redundant in September 1982 which left the design department with only 2 designers. She went on to work as an Art Technician & Loans Officer for the School Service at the Auckland Museum. She is currently Curator at the Ernest & Marion Davis Library, a medical history museum in Auckland.

This design was created in 1981 after Juliet returned from a trip to Japan to visit studio potters. It was inspired by the famous wood block print ‘The Great Wave’ by Katsushika Hokusai (1760-1849) and a deliberate attempt to get away from the 1980s pinks and greys. The design was made with the Forma shape in mind but was produced on other shapes as well as cookware. It was always a popular pattern and sold particularly well in Surfer’s Paradise.

In 1979 Dave Jenkin retired and was replaced with Tom Arnold who became Juliet’s manager. With the need to be more competitive it was decided to produce a stoneware range which was more durable than earthenware and a new shape was especially designed. Juliet produced several designs for the new shape including Winter Wheat which was to be used at Parliament House in Bellamy’s restaurant.

This was one of three stacking sets for children, the others being Pirate Pete (by Ian McNee) and Sally Anne (by Jan Scoones). These were produced in 1981.

At the time Juliet worked at Crown Lynn a large number of mugs were produced. Her ideas would be mocked up on paper and wrapped around mugs. If they were accepted by the Sales team they would do colour separations by hand; often up to 6 colours. It was then transferred to film which was made into a silk screen or an etched metal plate depending on the process. Arabic Archways was designed in 1982.

This was designed in 1982 and sold in Greece for a company called Devaz under a party plan sales scheme as a one off special. Last Wave was also sold under the same scheme. 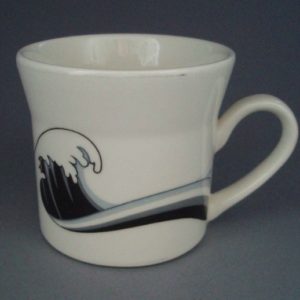 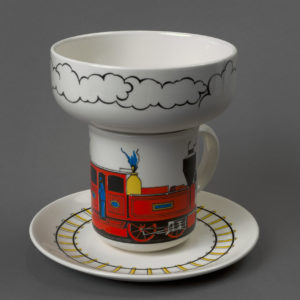 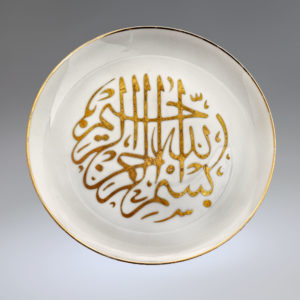