On Friday night, the 24th of September 1965, a crowd of 400 people gathered for a cocktail party in the function rooms at 246 Queen Street, above Crown Lynn’s flagship store. The crowd was a mix of designers, design aficionados, Crown Lynn sales reps from around the country and members of parliament, who were all her to celebrate the design awards. Everyone who entered was personally welcomed by Crown Lynn Managing Director, Tom Clark. [1]

During the design awards to launch the range of dinnerware styled by Dorothy Thorpe “A fashion parade of china, as elegant as any haut couture parade, took place . . .”[2] Where tables mounted on wheels were paraded through the room by two Air New Zealand hostesses, while another Air New Zealand employee topped with a blond bouffant hairdo announced what was being shown. Each table was set as if you were about to sit down for dinner complete with tableware, glasses, cutlery and linen. As each of the tables were wheeled out they were left in the room, until all six sets designed by Thorpe were parked amidst the intrigued crowd.

The main features of these wares were their ball handles, wide open designs and bright colours in a combination of matt and glossy glazes with textured patterning. These shapes and designs come straight from the Californian modern vernacular, where the designs are influenced by speed and modernity with colour and form being taken from Mexican culture and living outdoors.[3]

The six designs were ‘Monterrey’[4] glazed in a matte-mushroom colour-glaze, the plates and saucers are printed with an all-over surface decoration of a folded linen napkin, with a textured on-glaze pattern reminiscent of lace. ‘Palm Springs’[5] is in a muted olive green with a stylised daisy pattern printed in relief on the surface. This design was adapted from Mark Cleverley’s winning entry to the 1963 Crown Lynn Design Awards. Another design ‘Pine’ has a soft purple-blue glaze on the base, and a matte blue-black glaze on the face, which then has a stylised pinecone motif glazed on top in a fine granulated glaze, this was by Crown Lynn designer Dave Jenkin, and adapted by Dorothy Thorpe. ‘Santa Barbara’[6] in glossy pink with contrasting orange handles; the plates and saucers were hand-painted with a ribbon design in rich orange-yellow on a white background. The pattern ‘Brocade’[7] was glazed in delicate shades of Lilac and dusty blue, the brocaded effect was applied in a gloss glaze over a matte base, which catches the light and becomes luminous on the surface. And lastly ‘Laguna’[8] glazed with a pale grey-green interior, and pale mauve exterior, the lack of decoration shows off the fullness of the forms very successfully.

While researching for this paper I found a ball handled cup designed by Thorpe and produced by a French Porcelain house in c.1940. So this design would have originally been from the mid-to-late 1930s, and in 1965 Thorpe finally found someone to produce it commercially. 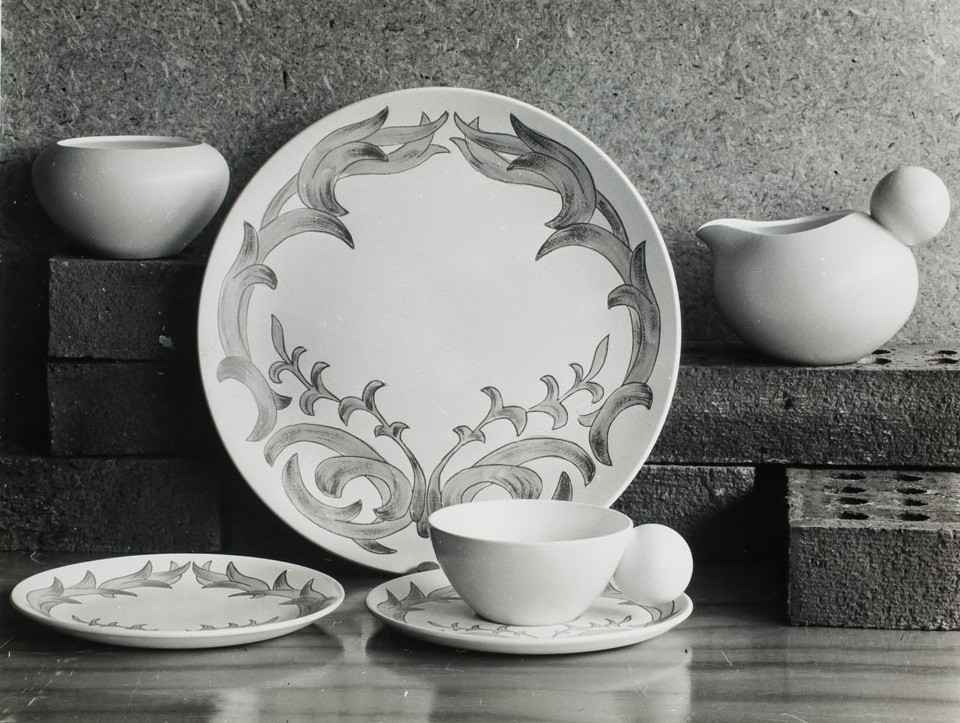 Alan Topham, who was the Marketing Manager for Crown Lynn met Dorothy Thorpe in New York when he was at the Atlanta Fair, looking for prospective buyers for Crown Lynn. “I can remember there was an English factory that had a whole lot of porcelain made in Portugal for [Thorpe]. It was very good and stealing everyone’s eye… it was a nice product. Very bright and colourful and sold very well. And we were a bit unfortunate because they were the ones that everyone was rushing to see. And we were just over the other side saying god why isn’t it us…” [10]

Topham said it was hard for Crown Lynn to break into the American market as people were a bit unsure about a product coming from New Zealand. “I went over there and met her and said to Tom she’s got a very strong reputation in America for glassware and wants to get into tableware. I think there’s a spinoff here that could suit us.”[11]

In 1965 Crown Lynn was Australasia’s largest manufacturer of ceramics, and were producing just over 10,000,000 pieces each year (that’s around 28,000 pieces a day); they employed 600 staff and had over 120 different designs available to purchase at any one time. Crown Lynn was being produced in a protected market, where import restrictions were tight to encourage local industry. By this time Crown Lynn had stores throughout New Zealand, had outlets in the Pacific and in every state of Australia. They had just purchased Luke Adams pottery works in Christchurch and Titian Potteries Limited in Auckland. Wanting to expand their market share, Crown Lynn was looking to sell in America and Canada. And what better way to get this new market than to employ an American designer to design a range of wares to sell back to the artist’s home market.

Reading over newspaper articles from the time the New Zealand market found these designs very challenging. In an article for the New Zealand Herald, Sales Manager for Crown Lynn Alan Topham reveals just as much about New Zealand as he does America – “The North American Dinner Plate is a quarter of an inch bigger than that preferred by New Zealanders, and the Americans prefer a shallower, more open cup than we do here.”[12] Topham adds – “The cups . . . a shape popular with the Americans who favour black coffee and so haven’t the worry of keeping a hot drink really hot.”[13] These cups, says Mr Topham, would not sell well in New Zealand where white coffee and tea are the most popular beverages. The ranges also included a shallow bowl for ‘tossed salads’ which was a very novel item for New Zealanders.

The appeal for Dorothy’s wares, according to General Manager Colin Leitch, is that they were not like anything being produced in England; no one was making raised granular patterns or matte glazes.[14] However these designs came at a cost – the ball handles would explode in the kiln, and getting the glazes to her specifications was very difficult for the Crown Lynn team. The textured design was a real feat of artistry and know-how, made by mixing matt-white glaze with glue, drying it and then granulating it until it resembled washing powder. The granules were then sprinkled onto a design stamped in glue, and during the firing process the granules would melt into the base colour making a unique effect.

Thorpe wanted contrasting colours inside and out, furthermore she requested contrasting handles on a selection of her ball handled cups. So the factory staff had to devise machines and processes to enable her vision. To create the contrasting handle colour on the cups, the balls were made separately by dipping each in coloured slip then bisque firing them and then joining the handles with clear glaze for the final firing – This make very weak handles, but gets the desired look. Glaze fountains that could colour the inside without having to mask the exteriors were developed. Up to this point Crown Lynn had only been glazing single colours on the outside of their cups and plates.

Ray Machin, a model maker for Crown Lynn remembers Thorpe’s designs well “We had [Dorothy Thorpe] in the design shop; that was enough. She caused the biggest headache. She wanted the golf ball as a handle. When you fired them . . . they blew off. Tom said oh, you’ve got to make them, you’ve got to make them.”[15] Ray adds – “While it might have been a nightmare to produce . . . it certainly brought a lot of kudos and good advertising to Crown Lynn.” Now you have to remember all of Thorpe’s wares were completely re-modelled, nothing was adapted – original models were made, tests done and moulds produced. It was a major exercise for Crown Lynn.[16]

A year after Dorothy Thorpe’s designs were released in America Crown Lynn re-modelled two of Thorpe’s designs, Pine and Palm Springs, on a more conventional straight-sided cup with smaller saucer and plates and released them as standard patterns.[17] These designs appealed to the design-conservative local market.

This text is an edited version of a paper that was presented in 2016 at the West Auckland Heritage Conference.

[4] Monterrey is the name of the largest city in Mexico

[5] presumably named after a city in California

[6] Named after another city in California

[7] This name refers to the pattern on the plate, named after brocaded fabric, where a sumptuous design is woven in over the warp.

[8] Named after Laguna Beach in California, a prominent resort town.

[17] They were also sold in the seconds shop – author’s conversations with public.